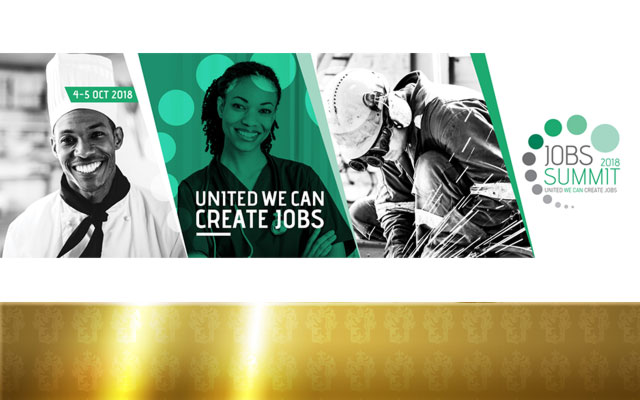 President Cyril Ramaphosa is set to open the two-day Jobs Summit which will be convened under the auspices of the National Economic Development and Labour Council (NEDLAC) on Thursday and Friday 4 and 5 October 2018 at the Gallagher Convention Centre in Midrand, Gauteng.

Held under the theme: “United we can create jobs” the Jobs Summit will bring together government, business, labour and community organisations to advance job creation. It will provide a platform for open discussion on the challenges faced by each social partner in the creation of jobs.

The Jobs Summit was announced by President Cyril Ramaphosa in his 2018 State of the Nation Address, where he noted that the Jobs Summit would be convened ‘to align the efforts of all sectors and stakeholders behind the imperative of job creation and to develop practical measures and initiatives to create employment for millions of South Africans.’

Ms Mpumi Mabuza, Brand South Africa General Manager for Stakeholder Relations said: “This conference is testament of how the issue of unemployment in South Africa has been prioritised nationally in all spheres of society (government, civil, public and private sector). We at Brand South Africa stand ready to work collaboratively with all industry players in both the public and private sectors to “jointly, boldly, and strategically” champion and cultivate South Africa’s development agenda by improving the socio-economic state and human condition for our country.”

The Jobs Summit comes on the back of rising unemployment. Statistics South Africa (Stats SA) second quarter data showed that unemployment had increased to 27,2 percent.

The conference will also have commissions to discuss various themes in which Director-Generals in the Economic Sectors, Employment and Infrastructure Department (ESEID) cluster will participate together with representatives from business, labour and community organisations. The themes will focus on: Enabling interventions/interventions supportive of employment creation, Sectoral interventions creating employment, and interventions focused on enhancing efficiencies.

The gathering will culminate with the signing of an agreement on the way forward and an anti-corruption pledge.