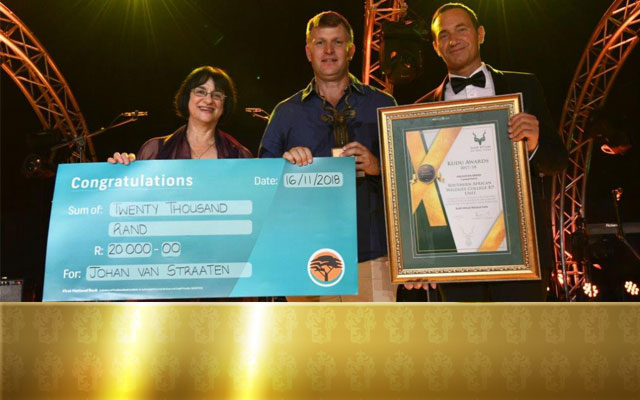 The Southern African Wildlife College (SAWC’s) K9 Unit won one of the prestigious Kudu Award at a gala event.

They shared this honour with the Meerkat Project, a high tech surveillance operation in the Kruger National Park.

Both projects were recognised for their innovation and results in countering poaching.

The innovation mastery of the Meerkat lies in the ability to apply technology to distinguish between humans and animals in an African bush environment, over large distances, where traditional surveillance equipment falls short because of the extreme temperatures, thick vegetation and terrain challenges.

The SAWC K9 Unit’s capacity was boosted this year by the highly innovative addition of 20 new, free-running pack dogs from Texas in the U.S.A. Since the arrival of the two new packs, the unit has been involved in 73 deployments in the Greater Kruger National Park where 43 poachers have been arrested and 18 rifles confiscated.

The awards were made possible thanks to forward-thinking and progressive partners who together, recognised internal and external stakeholders that have demonstrated exceptional commitment to sustainability, improving livelihoods, achieving real change on the ground in our national parks.

Facing some of the toughest challenges to conservation, innovation and technology won top honours at the Kudu Awards, indicative of the work being done using innovative technology, to combat poaching and tackle wildlife crime head on.

The Kudu Awards and the Chief Executive Awards recognise SANParks employees as well as multiple stakeholders and disciplines who play a pivotal role in strengthening conservation in South Africa. According to Fundisile Mketeni, SANParks CEO, “Innovation is one of the ways that we will and are able to better protect our national parks be it through anti-poaching efforts or finding solutions to climate change. If we don’t innovate we run the risk of losing our natural heritage. Tonight we honour several innovators who are leading the way in the conservation of our natural world.”

Another local organisation to receive an award was DAKTARI Bush School & Wildlife Orphanage who were awarded under the Non-Profit Making Institution Contribution category.

The Awards evening which also included the Chief Executive Awards recognises dedication and selfless efforts of SANParks employees towards achieving the goals of SANParks’ mandate. The lifetime achievement award went to Robert Phoku for 44 years’ service to SANParks.

Phoku started with SANParks as a Tipper driver in 1974. Since 2004 Phoku has been the dedicated driver for all Kruger National Park Management Committee tours inside the park. “We thank him for his hard work, reliability and dedication to the organisation which is exemplary,” said Mketeni.